Title: Something New
Author: Sibyl Moon
Fandom: Teen Wolf
Relationship: Female Stiles/Derek
Word Count: 11449
Warnings: NC-17, Language, Explicit Sex, Rule 63 Stiles, AU
Summary: Stiles was left at the altar after spending her entire life in a relationship with Scott McCall in one way or another. Her friends take her out for a night of drinking, dancing, and hopefully, debauchery. Can she change a lifetime of habit and restrictions to embrace who she can be; who she wants to be? Will she take a chance on hot bartender & club owner, Derek Hale, for just one night?
Without change there would be no butterflies — Maya Angelou 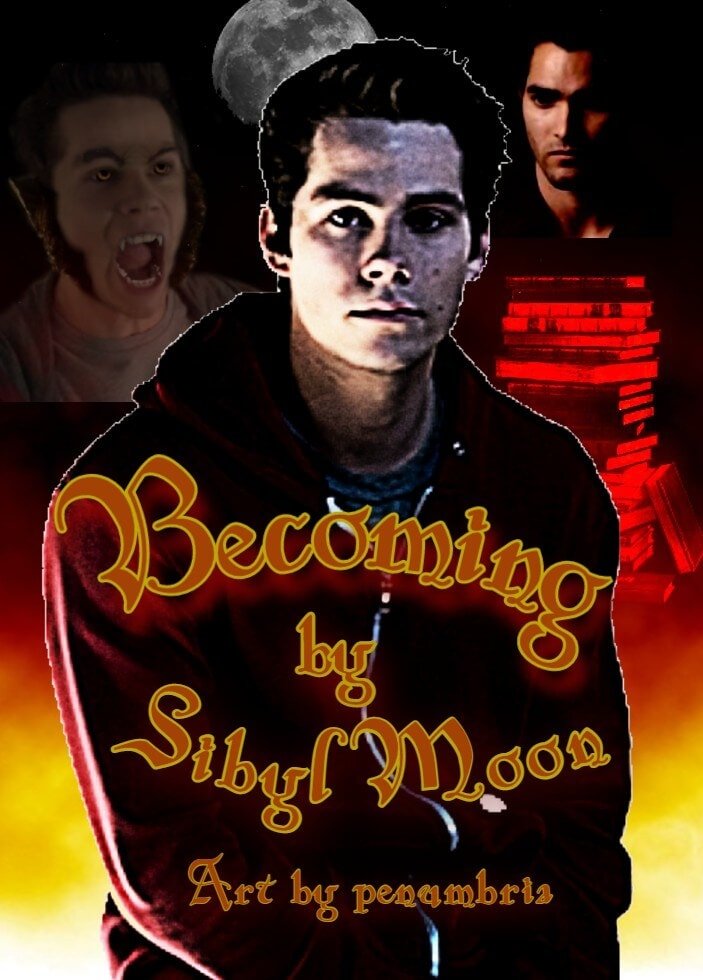 Title: Becoming
Author: Sibyl Moon
Fandom: Teen Wolf
Genre: Paranormal/Supernatural, Pre-Relationship, Shifters
Relationship(s): Gen, Pre-Derek/Stiles
Content Rating: R
Warnings: Hate Crimes/Hate Speech, Torture, Violence – Graphic, Discussion-Murder, Discussion-Rape, Discussion-Torture, Murder, Violence-Canon-Level, Kidnapping, Drug/Alcohol Use. Per Drug/Alcohol use: Sheriff drinks heavily in one scene. Discussion of Rape/Assault: Kate Argent & Bite as assault/rape. Hate Crimes & Hate Speech: As related to werewolves & hunters.
Beta: Twigen, Alpha Read by DarkJediQueen
Word Count: 57,600
Summary: A few days before Christmas, while out on his nightly run, Stiles is attacked by a monster in the preserve. When he begins to change, it doesn’t take him long to figure out what’s happening to him. Once he discovers Derek Hale is back in town, he finally has a few answers, even if they lead to more questions. Stiles isn’t sure he can trust the other man, but he believes that Derek is as invested in tracking down the feral alpha as Stiles is and that will have to do for now.
Artist: Penumbria ( Also on Ao3) Title: Intangible, Untamed, and Wild
Author: Sibyl Moon
Fandom: Teen Wolf
Genre: AU, Romance, Supernatural
Relationship: Stiles/Derek
Word Count: 50K
Beta: keldjinfae
Warnings/Rating: NC17, Canon-Typical-Violence, Discussion-Torture, Torture, Murder, Explicit Sex
Summary: Stiles is a wild thing born of storms and lightning, he’s been the guardian of Beacon Hills since Talia Hale abandoned it with her pack a decade ago. Derek is a newly made alpha returning to Beacon Hills with only the few that chose to follow him and he’s determined to make a home for his small pack.
Author’s Note: Halestrom is a fantastic and lovely artist who created such a wonderful piece of art that inspired me so much. I just adore it.
Artist: Halestrom

Title: Here We Are
Author: Sibyl Moon
Fandom: Teen Wolf/Criminal Minds Fusion
Genre:  Fusion, Romance,
Relationship: Derek/Stiles
Beta: Grammarly
Alpha Reader: EphemeronID
Warnings/Rating: Explicit Sex, Canon-Typical-Violence (OffScreen), Discussion-Kidnapping, Not a warning per se but there are no CM characters in this fic. This is a fusion of TW to CM and I did not include anyone other than the CM setting/world.
Word Count: 8750 words
Summary: Being part of the BAU team is a dream many strive for and Stiles Stilinski has made it. For nearly a year now he’s been on one of the top teams at the FBI. Stiles has plans, he’s dedicated to his job – overly so if you ask his team and he doesn’t have time for romance, no matter how good HRT Agent Derek Hale looks in his gear – or out of it.